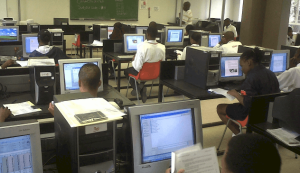 Not less than 22 Computer-Based Test (CBT) centres across the country have been removed from the list of others by the management of Joint Admissions and Matriculation Board (JAMB) for alleged fraud on candidates.T

The development was confirmed in a statement by the JAMB’s Registrar, Prof. Is-haq Oloyede on Thursday, August 27 during a meeting with representatives of the affected centres.

Oloyede noted that the centres were delisted from the 2020 UTME exercise for defrauding 11,823 candidates to the tune of N59million. The Registrar noted further that any centre that shared the same ownership with the blacklisted centres would be suspended from all JAMB activities.

Naija News learnt according to Oloyede’s confirmation that the de-listed centres were found to have charged candidates more than N200 as service charge just to effect corrections on their profile as well as bypassing One-Time Password (OTP) required of candidates to initiate such changes.

Naija News understands that their fraudulent act was uncovered following undercover payments to the centres.

Speaking further on the penalties to be faced by the centres, Oloyede said the affected CBT centres owners would be prosecuted.

He added, “The purpose of calling this meeting is to interact with 22 of you (institutions) that have grossly violated the prescription of the board, particularly during Covid-19 and those who have done things not expected to do, thereby endangering the lives of candidates that they were supposed to protect.

“Not only that, we have discovered that the 22 of you have also defrauded candidates by collecting from them more than you are expected to collect and doing certain things that would bypass the normal process and procedure.

“Some of you were collecting N3, 000, N5, 000 from candidates (for an amount that supposed to be N200 as service charge for the centre). What you have collected is over N59 Million.”

Meanwhile, Mr Patrick Areghan, the head of West African Examination Council, WAEC, had given updates on candidates infected with Coronavirus.

The WAEC head called on students who tested positive for Coronavirus not to panic, saying the virus is not a death sentence.