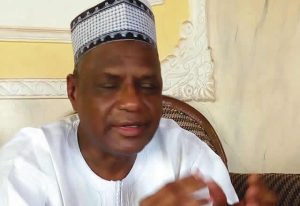 A chieftain of the All Progressive Congress (APC), Senator Abubakar Girei, has denied reports that he said the 2023 Presidency has been zoned to the South South region.

Girei, Chairman of the APC Registration and Revitalization Panel in Akwa Ibom State, made this known in a statement on Tuesday.

The lawmaker also denied saying that the decision to zone the presidency to the South South enjoys the support of President Muhammadu Buhari and the current party leadership.

He, however, called on the general public to disregard the report, adding that the said publication was a misinterpretation of what actually transpired.

The statement reads: “My attention has been drawn to a publication with a banner headline in national daily and lifted by some online medium where I was quoted albeit out of context that I said the All Progressive Congress (APC) Presidential ticket come 2023 has been zoned to the South.

“I was also quoted that the decision enjoys the backing of President Muhammadu Buhari and the party leadership.

“I spoke to our party supporters personally and was not represented as reported. That of truth as the Chairman APC Registration and revitalization panel for Akwa Ibom State, I spoke during the kick-off of the exercise at Senator Ita Inang’s Unit in Uyo, the state capital.

“That I called on the good people of Akwa Ibom state and the South South in general to support the ongoing registration and revitalization exercise, and appealed to them to register en mass for the betterment of the region in political calculations.

“It is also true that I did say that the Presidency should come to the South in view of the fact that the North have had eight years at the centre BUT was not specific that it should or must come from the South South.

“It is not true as quoted that I said I have the authority of Mr President or the current party leadership to say that APC has zoned the presidency to the South South.

“That every other thing reported was correct except where it was quoted that I was represented, that the Presidency has been zoned to South South and that I said I have the authority of the President and party to say so.

“Any inconveniences such report may have caused my party, the APC, the Presidency and ardent supporters of the party is highly regretted.”