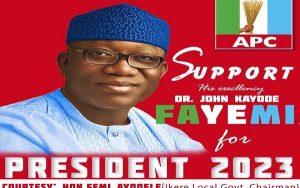 The posters which had Fayemi’s photographs on them as a contestant under the platform of the ruling All Progressives Congress, APC, went viral yesterday.

In a statement which was made available by his Chief Press Secretary, Yinka Oyebode, Gov Fayemi warned those behind the posters to stop distracting him from performing his primary duties.

It was learnt that the poster was allegedly sponsored by the Chairman of Ikere Local Government Area of Ekiti State, Mr Femi Ayodele.

The statement read in part: “The attention of Governor Kayode Fayemi, has been drawn to news reports of a campaign poster being purportedly circulated online by Femi Ayodele, the Chairman of Ikere Local Government Council.

Fayemi warned Mr. Ayodele and all his cohorts who started dishing out such posters to desist from the act.

He further noted that it should serve as a warning to political appointees, government functionaries, political associates and groups to operate within the ambit of decency and steer clear of actions that are capable of distracting the government, the party and the governor.