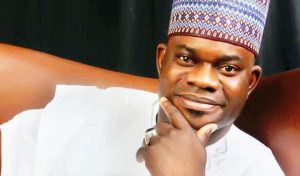 Governor Yahaya Bello of Kogi State has revealed the only reason he may participate in the upcoming Presidential election.

Responding to calls by some members of the All Progressive Congress, in particular, the Arewa Youth Forum that he should run for the 2023 presidency, the governor said only God would determine if he should join the race.

Bello whose presidential campaign posters were seen in some parts of the country recently, told AYF that the decision to contest is not in his hands but God’s hands.

Naija News understands that Governor Bellow stated this while receiving the Northern group led by its President, Gambo Gunjungu in Lokoja, the state capital, Bello said discussions are

However, a statement by Bello’s Chief Press Secretary, Onogwu Muhammed, quoted the governor as saying: “The discussions and events ahead of 2023 elections are in the hands of God to decide.

“The recent call on Nigerians, particularly the youth, to revalidate and register as members of the APC was an affirmation of the president’s good intentions”.

Bello, however, insist that it was time for the youth to take over the mantle of leadership in the country, charging them also to continue to support the President Muhammadu Buhari’s administration.