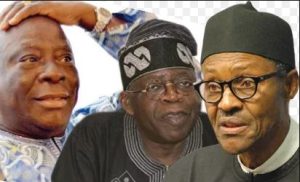 A factional leader of the Pan-African Yoruba group, Afenifere, Ayo Adebanjo, says President Muhammadu Buhari and the National Leader of the All Progressives Congress (APC), Nigeria’s ruling party, Bola Tinubu are engaging in a mutual game of deception.

Naija News reports that the elder statesman made this comment in reaction to the allegation that the recent dissolution of APC National Working Committee signalled the beginning of a cold war between Buhari and Tinubu, a claim which has been debunked by the Presidency.

Reacting to the claims that there is a rift between the President and the APC leader,  Adebanjo said he knew all along that Buhari was fooling Tinubu, adding that the former Lagos State Governor was also deceiving the president.

Adebanjo stressed that APC has no clear-cut ideology binding the party members together and that it was all about sharing offices and power, describing the party as a gathering of incompatible persons.

His words: “I have worries for him (Tinubu). He knew all these things but he relied on Buhari and worked to make him the President. I said it before publicly that Buhari is deceiving Asiwaju and Asiwaju is deceiving Buhari. Everybody is trying to use the other. Why can’t Tinubu hammer on restructuring knowing that this was what brought Buhari to office?

“I have been in this game for 70 years. So, many of those who are talking now were not born then. That is the truth – even Buhari was a toddler. He is now 74. Each time I tell you, why should Tinubu, the Vice-President (Yemi Osinbajo) and all those who were in Alliance for Democracy run to the APC? Why are they hesitating now to stand for restructuring? They can’t talk.

“All the things I am telling you now – it is not the first time. I said both Jagaban (Tinubu) and Osinbajo should get out of the APC. I said it openly. It is a disgrace and disservice to the Yorubaland. So, what is happening now shows there is nothing to bind them together,” Adebanjo opined.