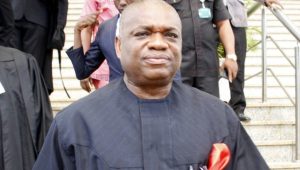 Orji Uzor Kalu, a former governor of Abia State and Chief Whip of the Senate, has said the constitution of the All Progressives Congress (APC) has no provision for zoning.

He made this known in Minna, Niger State on Monday during a visit to former Head of State, General Abdulsalami Abubakar.

Orji Kalu warned those clamouring for power shift that there is no zoning in the ruling party.

He advised those that want power to move from the North to the South to dismiss the erroneous to believe that after the eight-year tenure of President Muhammadu Buhari power would automatically be transferred to the South.

The lawmaker said: “Most people are not aware that there is no zoning of the position of the President in the constitution of the APC; Nigerians from every part can contest for the office of President.”

On insecurity, the former Abia insisted that the service chiefs are capable of tackling the current security challenges in the country.

Kalu accused saboteurs of frustrating all measures put in place to halt the carnage.

The Senate Chief Whip said he was in Minna on a private visit to welcome Abdulsalami from his recent medical trip abroad.