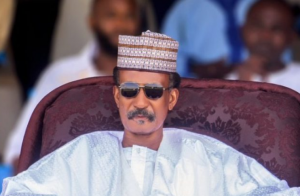 According to Dangiwa, he was not consulted before he was named as a member of the National Consultative Front.

Naija News reports Olisa Agbakoba, a Senior Advocate of Nigeria (SAN) and former President of the Nigerian Bar Association (NBA) had also dissociated himself from the group.

The National Consultative Front was unveiled on Wednesday with the aim of driving reforms across the country ahead of the 2023 general elections in the country.

The group is said to have been put together by 30 prominent Nigerians.

In his words, “My attention has been drawn to a widely circulated story that I am part of the promoters of a new political movement known as the National Consultative Front.”

“This is not true. I was never consulted and I am not part of the National Consultative Front.”

Meanwhile, it will be recalled that Dangiwa recently penned an open letter to President Muhammadu Buhari in which he accused the Nigerian President of giving preference to some tribes over others in Nigeria.

Dangiwa further stated that the enthusiasm that is supposed to greet the president’s celebration of his 5th year in office is not shared by many Nigerians because they are not satisfied with his leadership.