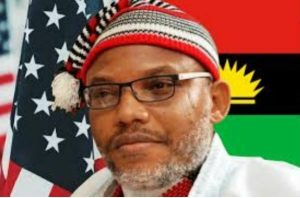 The leader of the outlawed Indigenous People of Biafra (IPOB), Nnamdi Kanu, says the group will not support any Nigerian President of Igbo extraction in 2023.

Kanu made this known in a statement released on Sunday by IPOB’s Media and Publicity Secretary, Emma Powerful.

According to the pro-secessionist, many of the Igbo vying for the presidency are traitors and stooges of the Caliphate that will sabotage the interest of Ndigbo and Biafrans.

Kanu said that the same people shouting President of Igbo extraction today will turn round to work against their own people tomorrow in favour of a non-Igbo because of selfish interest.

He noted that some of the politicians agitating for Igbo presidency openly worked against late Dr Alex Ekwueme, at the Jos PDP convention for the candidature of the President of Nigeria in 1999.

Kanu added that the same politicians conspired and failed to support or campaign for Peter Obi when he contested with Atiku Abubakar as running mate under PDP in the 2019 elections.

The statement read in part: “We cannot support any person that will kill us. That will mean the end of Biafra emancipation as we know. It is still fresh in our minds what transpired at Jos PDP convention when the late Dr Alex Ekwueme contested for the candidature of the President of Nigeria under PDP in 1999.

“Then, the likes of Jim Nwobodo, Orji Uzo Kalu and virtually every other Igbo delegate at that convention voted against him. These Igbo men sabotaged Igbo presidency then, what has changed since 1999 that will make them come out now to shamefully clamour for the same Igbo presidency they publicly rejected in 1999?

“Similarly, when Mr Peter Obi, in 2019 was contesting with Abubakar Atiku as his running mate, Governor Dave Umahi and his co-travelers in conspiracy business did not support or campaign for him despite being in the same political party-PDP.

“We are surprised that these people shouting President of Igbo extraction today but sabotaged their own people yesterday think we have forgotten, they also think others will support them when it is their turn.

“Besides, if these myopic and self-centered fellows think producing the President of Nigeria will solve the problem of Ndigbo, when Goodluck Jonathan, an Ijaw man from South-South was Nigeria’s President for six years, what did he do for the East in general and Ijaw people in particular?

“The same Northern oligarchy that did not allow him to operate freely will still not allow any stooge they may eventually appoint from Igboland to succeed. So, it makes no sense clamouring for what won’t proffer any solution to our problems.

“The few major roads built in South-East and South-South were done not by Igbo man, yet none of these traitors masquerading as Igbo leaders today has been able to compel their slave masters to rehabilitate them. Most of these self-acclaimed Igbo and Old Eastern region leaders are caliphate-bred traitors and we cannot trust them.”