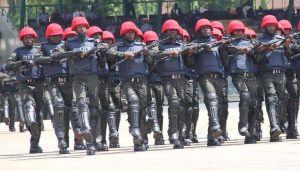 Thirty-four persons with a series of criminal activities which include, armed robbery, kidnapping, cultism, piracy among others has been paraded by the Police Command in Cross River State, Naija News learnt.

According to the state police commissioner, CP Abdulkadir Jimoh while parading the suspects, a total of 8 firearms, 5 ammunition was recovered during the arrest of the suspects.

Jimoh told newsmen that 10 among the suspects were confirmed to members of an armed robbery gang.

“Others, were 6 kidnappers, 6 cultists, 1 unlawful possession of firearms, 3 sea pirates, 5 for murder, 2 for rape cases, and a drug vendor,” the CP revealed.

Jimoh, however, admonished parents to look after their children, watching closely each of their activities noting that the command will not spare criminals.

He said, “I want to reiterate and unequivocally state that the Command has strategized and mapped out an onslaught on cultism, armed robbery, kidnapping and other social vices.

“The command will not stop soliciting the support of traditional institutions, religious leaders, youths, community leaders, civil liberty organisation and political class to join hands with Police to fight these hydra-headed monsters that tend to shatter the peace of the state,” the CP added.

Meanwhile, a woman in Lagos State has alleged that Police Special Anti-Robbery Squad, SARS arrested her only son and demanded N500,000 for his release, Naija News reports.