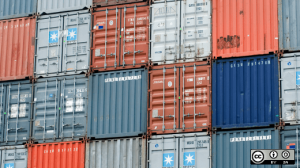 The incident occurred around 10.45p.m was confirmed by the Director-General of Lagos State Emergency Management Agency, LASEMA, Dr. Femi Oke-Osanyintolu.

He noted that emergency responders have taken the bodies to a morgue.

The truck was said to have been loaded with an empty 40-foot container, but suddenly lost its brake, which resulted in the accident.

Driver of the ill-fated truck  was however rescued by officials of LASEMA personnel.

“Sadly, two adult females lost their lives and their remains have been transported by State Environmental Health Monitoring Unit, SEHMU, to the mortuary,” Oke-Osanyintolu stated.