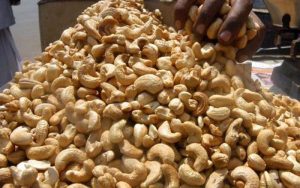 The Federal Government has announced its readiness to focus on the development of cashew agro-industry in Nigeria.

The government disclosed this on Sunday, February 14 revealing that it’s putting the country’s funds from the export of cashew at $500m.

According to the Minister of Agriculture and Rural Development, Sabo Nanono, who disclosed the development yesterday, the project was to support about 500,000 families across the nation.

Naija News understands that Nanono disclosed this in Abuja when he penned his signature on a Memorandum of understanding with the United States Department of Agriculture West Africa PRO-Cashew Project.

A statement from the Federal Ministry of Agriculture and Rural Development, issued by an officer in the press department, Okeh Juliet explained that the initiative would improve productivity, expand the national hectarage of the crop and achieve national food and nutrition security, revenue generation, exchange earnings, wealth creation and employment across the country.

“Nanono informed (his guests) that government’s focus is to continuously and sustainably develop the commodity for export because since the 1990s cashew has increased the Nigerian Gross Domestic Domestic ranking as the second non-oil export foreign exchange earner for the country,” the statement stated.

Nanono disclosed further that “Currently, the national production capacity of cashew in 2020 is 260,000 metric tonnes on 100,000 hectares of land. Average yield is 600kg/ha as against the global average of 1.23kg/ha.”

To commenced the project collaboration with the USDA West Africa PRO-Cashew project, Nanono constituted the Cashew Value Chain Working Committee to look into the problems and challenges affecting the growth of the sub-sector in Nigeria. He said the committee with the support of USDA West Africa PRO-Cashew Project would develop a 10-year strategic plan for Nigeria cashew project.

In another news, the Comptroller-General of the Nigeria Immigration Service, Muhammad Babandede has said that there were no armed herdsmen in Nigeria, Naija News reports.