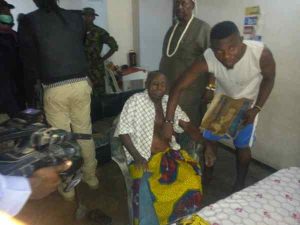 The traditional ruler was rescued after spending a night at the kidnappers’ den until he was rescued by “Operation Akpakwu”, a security outfit formed by the Ayade administration to tackle kidnapping.

The monarch’s Grandson, John EFA Eyamba, who narrated how the victim was taken hostage, stated that two unknown persons entered their compound around 8:30 pm and requested to buy chicken.

Unknown to the compound’s security man that they were kidnappers, the security man took them to the chicken poultry where the intruder offered to pay two thousand per bird.

Subsequently, the intruder prevailed on the security to go to the lady’s room and find out if she would sell the chicken for the said amount.

Upon return from the land lady’s room to inquire on the last price that the chicken would be sold, the second intruder hit the security man’s waist with a piece of wood and the security man fell on the ground.

However, the family of the victim put a call to Operation Akpakwu ( joint taskforce of security personnel headed by the army) went after the kidnappers, combed the creek, in search of the victim.

According to one of the soldiers who said he wouldn’t want his name mentioned in print, said, “At about 3:am this morning we hard people murmuring at the death of the night, we heard them asking the traditional ruler, how much would you pay before WD can release you?.

The army personal stated that he and his men laid siege until it was dawn stressing that at about 6: am Tuesday morning, soldiers confronted the kidnappers to enable them to rescue the traditional ruler.

In an attempt to rescue the traditional ruler, the kidnappers opened fire on the soldiers stressing​ that the army had no other option than to fire back until they​ got the kidnappers​ overpowered​ and rescue the victim.