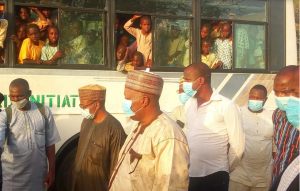 The Kano State government has said no less than one hundred and ninety-three Almajiri children have tested positive to COVID-19 disease in the state following a recent test carried out on hundreds of them.

According to the state’s commissioner for education, Muhammad Kiru, during the COVID-19 briefing at the government house yesterday, 193 Almajiri children out of 244 have tested positive for the dreaded disease.

The commissioner revealed that some of the Almajiris who tested positive to the novel virus were recently repatriated from other states.

Kiru noted that the Kano government has received so far a total of 244 Almajiris while it also repatriated 1,183 children to other states.

He said, “Since we began the repatriation of Almajiri, we have successfully repatriated 1,183 and have received 244.”

“We fed them, gave them the required healthcare, and got them tested where we discovered 192 to be positive and got them isolated.”

Naija News understands also that the Kano State government has shut down all Almajiri schools in the state pending the general reopening of schools in the country.