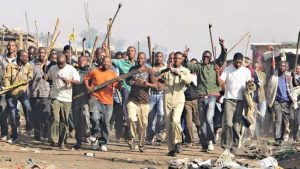 A clash has ensued at Kpakuru communities of Gwagwalada Area Council between natives and  the Nigerian Army over moves to take over their land.

The natives were said to have come out in their numbers to barricade all form of entry to the disputed lands.

The parcel of land in question is about 9,000 hectares and plays host to about 80 communities.

It was learnt that the army sent some bulldozers and other equipment to the site to construct structures on them.

However, they were hindered by the villages who refused to be intimidated by their guns.

The commotion continued as the communities vowed that they wont give their lands to soldiers.

Speaking with the Leader of Coalition, FCT Indigenous Association, Dalhatu Ezekiel Musa, he saaid the military was bent on forcefully taking over their lands.

Ezekiel said, “We have talked to the FCT Minister, who has the statutory mandate of land allocation. He has testified in several fora that the Nigerian Army does not have an allocation and land title in that area and that what they are doing is forceful acquisition.

“This is not a banana republic. You cannot just forcefully push people out and demolish their houses. We will keep resisting them. We have asked the government to act on our complaints.

He complained that the soldiers brutalised people in their communities

He said the army even has a cattle ranch there, wondering when the army turned to merchandise when their primary responsibility is the protection of the territorial integrity of the country.

Meanwhile, the Chief of Army Staff, Tukur Buratai, was quoted to have said the land was officially allocated to the army in 1979 while a certificate of occupancy was issued in 2011.

Buratai was quoted as saying, “In 2011, when all lands were revoked, and landowners were directed to recertify, the Nigerian Army duly applied for the recertification, and they have legally recertified this particular land.”

The clash and lingering land dispute in the area is no news.

Naija News understands that it dates back to the designation of Abuja as the federal capital city of the country.

Recall that on May 8, 2019, some angry youths in the area had blocked the convoy of Vice President Yemi Osinbajo  while on his way to the airport, protesting against the alleged seizure of their land by the Nigerian Army.

The vice president was heading to the airport in the morning when he ran into the protesters at Goza village. He was forced to alight from his car to address the villagers after his security aides failed to appease them.