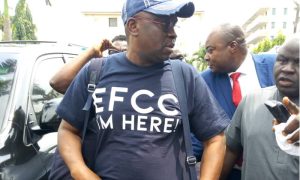 Former Ekiti State Governor, Ayodele Fayose, has described Muhammadu Buhari as an ‘accidental President’, who is not just clueless but unconscious of things happening in his presidency.

The Peoples Democratic Party (PDP) made this known while responding to a statement by President Buhari’s Special Adviser on Media and Publicity, Femi Adesina.

Naija News recalls that Femi Adesina in a statement titled ‘Wike Vindicates Buharists’, said the president refused to deal with Fayose and Governor Nyesom Wike of Rivers State despite his combative and truculent disposition.

The presidential spokesperson stated that Muhammadu Buhari would have dealt with the duo for their “anti-Buhari tendencies” but he didn’t.

Reacting in a post on Twitter on Sunday, Fayose claimed that he has been quiet having concluded that Buhari’s Presidency is deaf and dumb.

Fayose tweeted, “the comment by my brother and friend, @FemAdesina, on the President not “dealing with myself and Gov Wike,” President Buhari, in my opinion, is an “Accidental President,” who is not only clueless but unconscious of happenings in his own Presidency.

“A man who can’t defend or protect his immediate family is not in any way better than an effigy. If not, those around him won’t be talking about a President “punishing” serving governors or even ordinary Nigerians as if they are his servants.

“Femi Adesina, do you realize I have been quiet for a while, having concluded that Buhari’s Presidency is deaf and dumb? So don’t wake a sleeping lion so as not to be confronted with consequences you can’t contend with.”