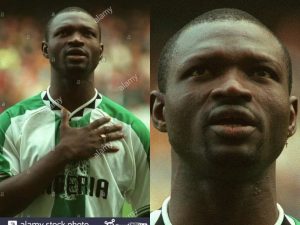 Former Nigerian professional footballer who won bronze at the 1992 Africa Cup of Nations in Senegal, Ajibade Babalade is dead.

Naija News learnt that the ex-Super Eagles player died on Friday, September 4, 2020, in Ibadan, the capital city of Oyo State.

It was reported Babalade who turned 48-years-old on March 29 this year died after suffering cardiac arrest. Naija News understands that the former Super Eagles defender had died while still serving as the Team Chef of Shooting Stars FC.

PUNCH reported that Babalade died while being rushed to the University College Hospital, Ibadan, in the afternoon today.

Meanwhile, Naija News had reported earlier that the Africa Cup of Nations (AFCON) trophy has been stolen from Egyptian Football Association headquarters in Cairo.

The development was confirmed by the Egyptian Football Federation to Goal that the trophy won by the Pharaohs three times in a row has been lost.