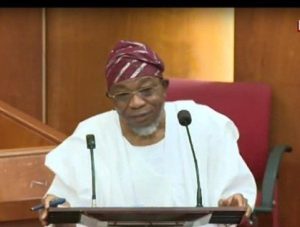 The Minister of Interior, Ogbeni Rauf Aregbesola, has denied receiving 96-month salary arrears in secret when he served as the governor of Osun State.

Aregbesola had on numerous occasions claimed that he did not receive any salary throughout his two-term as governor due to his personal conviction on inclusive governance.

But Daily Post had in a report claimed that the former governor had directed the Ministry of Finance – before the end of his tenure – to pay his salaries for the whole eight years in office, amounting to several millions of Naira, which was paid to his personal account.

Reacting in a statement by his media aide, Sola Fasure, Aregbesola described the report as a fiction written by elements bent on casting “aspersion on the integrity of Ogbeni Rauf Aregbesola”.

He said the author of the report “falsely claims that the Minister of Interior and immediate past governor of the State of Osun, Ogbeni Rauf Aregbesola, towards the end of his tenure, secretly received the backlog of his full salary for the entire period he was governor, contrary to his asserting that he never did.

“The report is entirely a piece of fiction, a good exemplar of fake news and disreputable journalism.”

“Let me state categorically again that Ogbeni Aregbesola did not receive any salary in the entire duration of his eight-year stint as governor in Osun,” Fasure added.

“His reason being that the state government provided accommodation, security, transportation, food and other conveniences for him and would not need to pay for these from his pocket.

“He also explained that all his children are grown up and have graduated and he would not need to pay school fees again. He therefore donated his salaries to the state government.

“The author of the report claims to have got the information from some anonymous government officials. He provides no evidence.

“The report fails the basic journalistic ethical requirement that only truth and verifiable fact should be reported as news. Reading through it, one is not in doubt that the evil intention behind the piece was to smear and cast aspersion on the integrity of Ogbeni Aregbesola.”