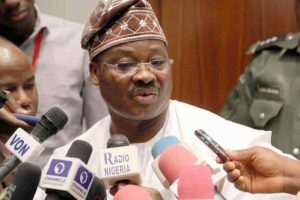 The aide of the former governor of Oyo State, Abiola Ajimobi, has spoken on the health of his principal.

The aide who pleaded anonymity noted that his principal who was named the Acting National Chairman of the All Progressives Congress is “fine and better” now.

Recall that the former governor was reported to be in a critical condition at the First Cardiologist and Cardiovascular Consultants Hospital, Lagos due to complications from Coronavirus.

The source while speaking on his condition said, “Coma? I don’t think so. He was very sick, but he is better now”.

Meanwhile, Ajimobi was on Tuesday night appointed as the Acting National Chairman of the All Progressives Congress.

This is coming after the National Chairman of the party, Adams Oshiomhole, was suspended following the decision of the Court of Appeal to uphold the earlier ruling of a High Court.

The party’s National Publicity Secretary, Lanre Issa-Onilu, in a statement released on Tuesday noted that the decision was guided by the legal department.

However, the Deputy National Secretary of the party, Victor Giadom, has insisted he is the Acting National Chairman of APC.