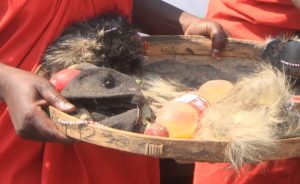 A young lady called Patience Samuel, 20, has been accused of witchcraft by her aunty who threatened to kill her and “drink your blood.”

Daniel Aigbogun, who is a pastor made the claim, alleging that this took place in Sabon Kaura, Bauchi State.

He told Naija News that the aunty locked Patience up in a room in their house, on June 24th, 2020, before the young lady managed to escape via the roof.

According to Daniel, upon her escape, Patience who is his mentee, ran to his place for safety with the aunty storming his premises later in the day, alongside two others, to forcefully take her away.

He narrated that during the argument which ensued as Patience’s aunty insisted on taking her away, the woman threatened Patience, saying “I will kill you and drink your blood.”

“The aunty alongside her daughter and one man(who they claim to be a pastor)later came for her that evening,” he narrated.

“But when I made efforts to pacify her over the issue, she was shouting that she must go back home with Patience; she then said “I WILL KILL YOU AND DRINK YOUR BLOOD”(that is to Patience); so I told her that I could not release Patience to her unless she came with police so I could be sure that  Patience was safe.”

Continuing, he claimed, they (Patience’s aunty and her entourage), went to the Yelwa Divisional Police State in Bauchi and, in connivance with the officers, accused him (Daniel) of kidnapping the girl.

“She went to Yelwa Police Divisional Headquarters,” Daniel explained, “and connived with the Police for a kidnap case and the Police came, picked me up, alongside with Patience and some others on 24th, June 2020.

“I was detained and Patience refused to follow her aunty home that 24th June,  until they pressurized her and finally forced her to follow her home the night of 25th June.”

The Police, Daniel claimed, “didn’t only threaten my life, but they kept me and other suspects in the same cell with some alleged COVID-19 patients met for isolation.

“The Police so threatened me that even the DPO said to me, ‘even if they want to kill her, is she not their daughter? Why will you refuse to give her to her aunty?’”

He added that “Throughout my stay in that station, I did not say much so that they will not kill me there and cover it up.

“I’m writing this story not because I’m afraid of death, for even if they will kill me for my faith and that of Patience in Christ, I will still continue to fight this fight of faith; but I’m writing this so everyone could help me to share it till it reaches the Bauchi State Government, and the federal government, In case of anything, Nigeria Police should be held responsible for my Life.”

Although as at the time of this report, Daniel has been granted bail but said “I don’t know the whereabouts of Patience.

“I have chosen to self-isolate,  pending when I can reach NCDC to come to carry out a test.”

15 thoughts on “Alleged Witchcraft: Woman Locks Up 20-year-old, Vows To Drink Her Blood”