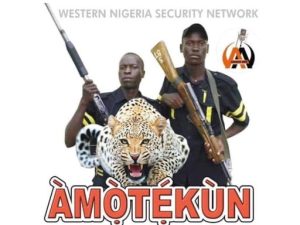 South-West Security Network codenamed Operation Amotekun has been accused of shooting no fewer than 20 persons in the Ibarapa Local Government Area of Oyo State.

Speaking with newsmen in a recent interview, Qudus Odugbemi claimed that his cousin, Rasaq Odugbemi was murdered by the local security outfit while sitting at the front of their family house.

Qudus told PUNCH reporter, OLUFEMI OLANIYI that they were at the front of their home at that faithful night, about 9 PM when the incident happened.

According to him, the incident happened after men of the Amotekun corps stormed their area in Tapa to disperse some youths during a carnival. A few days ago, there were reports that two persons feared dead after Amotekun corps and Youths clashed in Oyo State, Naija News recalls.

Digging deep into the happening which has become disturbing to citizens, reporters took out time to visit the scene of the incident.

Narrating the further on what led to the death of his cousin, Qudus said: “My name is Qudus Odugbemi and the deceased, Rasaq is my cousin.”

“He was 20 years old. He had completed his secondary school education and had applied to a higher institution; I think the polytechnic in Abeokuta. He was supposed to sit the entrance exam into the institution on Monday, January 11 but he was killed by Amotekun just few days to that,” he revealed.

Giving an insight into how Rasaq was killed, he said: “We were all at our family house in Tapa that fateful night. We all normally go there because that is where we grew up. We would leave the place around 9pm for our various houses.

“On that day, at around 6pm, I saw some youths preparing for a street carnival. I knew that there was not supposed to be any carnival this period because of the security situation in the state and especially in our area (Ibarapa). I called the DJ and asked him what was going on. He told me that they had the permission of the government to hold the carnival till 9:30pm. I am not sure of his claim but I told them that they must leave latest by the time he said they were given.

Qudus alleged that the Amotekun corps drove recklessly to the scene of the incident while he was leaving for home at about 9 pm, with his cousin still at the front of their family house.

“They drove recklessly into the midst of the youths at the venue of the carnival and this approach infuriated the people there. You know everybody cannot reason the same way, some of the youths started challenging the Amotekun corps and asking, ‘Do you want to kill us? Do you want to crush us with your vehicle?”

“Many of them (youths) were drunk anyway. They said the time was 9 pm and they had permission to stay there till 9:30 pm.”

Qudus said, “the argument, however, resulted in bloodshed after one of the Amotekun personnel brought out his gun and threatened that the youths would be shot.”

“The youths became angrier and started saying, “Are we animals? Shoot us now.” That was how one of the Amotekun corps shot at the crowd and about eight persons fell to the ground. They were shot on the legs and they were injured.

When asked on the number of persons killed in the incident, he said: “Five persons were shot and injured in front of our house alone. When they saw what happened, the angry youths started throwing more stones at the Amotekun personnel. That was when one of the Amotekun men pointed his gun towards our family house and fired gunshots in that direction. Five persons in front of our family house were hit by bullets. My cousin, Rasaq, was hit on the chest and he fell down. There was also a lady, Aishat Odugbemi, who was hit under her breast; another lady, Faida, I don’t know her surname, was hit on the leg. A bullet hit one old man on the leg as well. In all, five persons were hit in front of our family house.”

“And then, when the youth mobilised and were chasing the Amotekun corps, more gunshots were fired and another person was hit. In fact, no fewer than 20 persons were hit by bullets that night. Some were taken to different hospitals; some went to traditional healers where the bullets were removed. One of them was transferred to the Federal Medical Centre in Abeokuta this morning (January 8). It was terrible.”

When asked if any government official or security men had visited the scene to confirm or react to the incident, Qudus told newsmen that “the Amotekun Commander came from Ibadan; he came to our family house but the people there did not receive him; they asked him to go back. They said they didn’t want to hear anything from him. The father of the slain youth (Rasaq) said he wanted the truth about the crisis to be told. They dished out lies to the public about what caused the killing and this saddened us the more.”

The eyewitness described as a lie claims by the Amotekun corps that the youths first fired gunshots at them and they responded to the attack.

He said: “It was a lie fabricated to cover their wickedness. Everybody in the family started weeping when we read what they said. It is very painful. Is that the way they have been going about shooting and killing people and calling them hoodlums?

He also described as a blatant lie the report that the security corps were chasing some kidnappers but were prevented to pass by the youths despite pleading with them.

“They were not pursuing any kidnapper, they were not chasing anybody. They went to the venue of the carnival to stop it,” Qudus alleged.

He added: “Instead of inviting their leaders for a talk, they just drove recklessly into the venue. The Commissioner for Special Duties has come and we told her that Amotekun had been lying. The commissioner said she knew the truth; she promised that she would take the issue up but I know she would not do anything about it. The truth is that the youth did not shoot at Amotekun. There was an argument, the youth threw some stones at them and they opened fire on the people. That is the truth. They are just doing everything to cover up their wickedness. They should recruit people who are intelligent; there would not have been any bloodshed if they had behaved like professionals that night. The government just gave guns to illiterates to be shooting people everywhere. They are supposed to be working in the bush and not in the town.”

“The windscreen was broken but I don’t know who did that. But the house built by the father of one of the Amotekun personnel was burnt and a personal car belonging to another Amotekun member was also burnt,” he noted.

He, however, noted that his cousin has been laid to rest since Thursday, July 7.

Speaking on how the mother of the deceased is reacting to the sad development, He said “She is grief-stricken. You need to see her. The woman has four sons but Rasaq was the only one available to drive her to the villages where she buys foodstuffs and takes them to Lagos to sell. He was very helpful to her. The woman is being consoled by so many people now.”

Meanwhile, Amnesty International has said it is concerned about recent allegations against the Security Network Agency codenamed Amotekun.