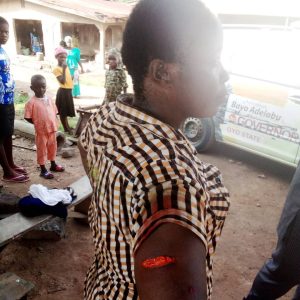 A chairman of the All Progressives Congress in Ogbomoso South Local Government Area of Oyo State has reportedly caused pandemonium after he allegedly used a broken bottle to stab the woman leader of the party.

According to a report monitored by Naija News on Daily Post, Kamorodeen Abisoye and Mrs Felicia Ogunleke engaged in a rowdy argument on Monday morning, September 28 over how to distribute some items reportedly given to party chieftains in the locality.

The argument, however, resulted in bloodshed after the party chairman stabbed the woman leader on her hand with broken bottles. The two members of the ruling party were said to belong to different factions of APC in the state.

Naija News learnt that the items which caused the misunderstanding were given to the party a politician in the state.

When contacted by newsmen to confirm the incident, Abisoye stylishly ignored the interview by saying he cannot talk because he was in a meeting.

“Please, excuse me. I am in a meeting,” said the party chairman when the news correspondent identified himself as a journalist.

On his part, Public Relations Officer of the State Police Command, Mr. Olugbenga Fadeyi, when contacted noted that he has not been briefed about the incident.

“You know it just happened this morning. I will get the details later,” said Fadeyi in a telephone conversation with reporters.

Meanwhile, Governors of the ruling All Progressives Congress (APC) under the aegis of Progressive Governors’ Forum (PGF) on Sunday condemned Saturday attack on the convoys of Governor Babagana Zulum.

Speaking via a  statement on Sunday, Chairman of the Forum and Kebbi Governor, Abubakar Bagudu , commiserated with the people and government of Borno State over the attack on governor’s two convoys along Maiduguri/Baga road of Borno State, Naija News reports.