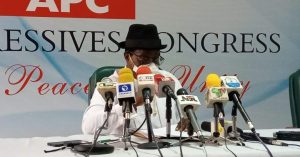 The National Secretary of the All Progressives Congress (APC), Waziri Bulama, has described the National Executive Committee (NEC) called by Victor Giadom as illegal.

Naija News reports that President Muhammadu Buhari had backed Giadom as the authentic Acting National Chairman of the APC while promising to attend the virtual NEC meeting scheduled for Thursday at the Presidential Villa.

Recall that Giadom, in a letter dated June 23, notified the Independent National Electoral Commission (INEC) of an APC NEC meeting.

Reacting in a statement on Wednesday, APC scribe, Bulama, asked members of the ruling party to ignore the notice of the NEC meeting.

The APC national secretary claimed that Gaidom was not a member of the party’s National Working Committee (NWC) as he voluntarily resigned to contest the position of Deputy Governor in Rivers State during the last general elections.

Bulama said: “We are constrained to once again react to a purported invitation to a National Executive Committee meeting of our great party; the All Progressives Congress (‘APC’) issued by one Victor Giadom who until the last general elections in 2019 held the position of deputy national secretary of the party.

“Our esteemed members are advised to disregard this invitation because the author and sole signatory of the said invitation is not by a member of the National Working Committee (‘NWC’) of our party, talk more of being an Acting National Chairman as claimed.

“He had voluntarily resigned in compliance with Article 31(1)(i) of our Constitution to contest the position of Deputy Governor in Rivers State during the last general elections and has not been re-nominated by his Zone to return to that office.

“Further, his non-membership of the NWC has been affirmed by the Courts and an Order restraining him from parading himself as a member of the NWC.

“Our leader, the President of the Federal Republic of Nigeria is renowned for insisting on compliance with our constitution and rule of law.

“It can therefore not be true that Mr. President supports the convening of such an illegal NEC by a non-member of APC’s NWC. We urge all to disregard the said notice as neither the NWC nor the NEC has called for such a meeting.”