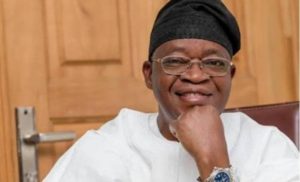 The Osun State Governor, Gboyega Oyetola, has congratulated the Governor of Ondo State, Rotimi Akeredolu, over his victory at the All Progressives Congress’s primary on Monday.

The Governor, who is a member of the APC National Caretaker/Extra-ordinary Convention Planning Committee, called on all stakeholder of the party to accept the outcome of the electoral process.

Naija News had earlier reported that the Ondo State Governor emerged winner of the APC primary which was held on Monday in Akure with 2458 votes.

Oyetola in his statement called on the party’s stakeholders to work together with the governorship candidate of the party to deliver the state to APC.

The Osun State Governor while reacting to Akeredolu’s victory through his spokesperson, Ismail Omipidan, said it was a no victor and no vanquished situation for the individual party members, adding that after the primary, what should now be paramount is the collective victory of the party in the October governorship election.

He said, “I am happy that we had a rancour-free congress in Ondo. The outcome should be seen as a no victor, no vanquished situation.”

“I congratulate my brother and colleague on his emergence. With his emergence and support of our party faithful and critical stakeholders in the State, I have no doubt that victory is assured for our party, the APC, in October.”

“I salute our party faithful and stakeholders, especially all the governorship aspirants, for their courage and loyalty. I want to sincerely appeal to those who left for one reason or the other to return to our big political family, as APC is big enough to accommodate all.”