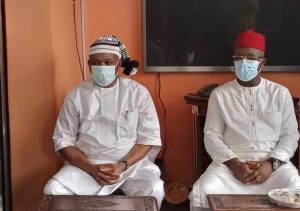 The All Progressives Congress (APC) has expressed happiness over the news that former Chief of Army Staff, Lieutenant-General Azubuike Ihejirika has officially joined the party.

This news platform had reported that Ihejirika, who was the Chief of Army Staff under former President Goodluck Jonathan, joined the APC at Isuikwuato, his country home in Abia-North Senatorial District.

Speaking after joining the APC, General Ihejirika said that he’s coming into politics by joining the APC is to contribute to the progress of the party at the state and national level.

However, Abia State APC Chairman, Donatus Nwankpa, said the entrance of former Chief of Army Staff has further boosted the party’s chances of retaining the Presidency in 2023.

He added that Ihejirika joining the APC will increase the party’s chances of capturing the Abia governorship seat in the 2023 general elections.

Nwankpa boasted that Ihejirika joined the most populous party in Nigeria and Africa.

“It is a huge success because it will help to strengthen our party ahead of the 2023 general elections in Abia.

“Our chances of capturing the Abia governorship seat in the 2023 general elections have further been enhanced by the General’s membership,” he said.

Recall that Ihejirika’s registration was conducted by the APC ward Chairman Iheanyi Chukwu in the presence of stalwarts of the party which include: Senator Orji Uzor Kalu, State Secretary of the party, Barr. Perfect Okorie; Deputy State Women leader of the party, Lady Franca Osuwa.