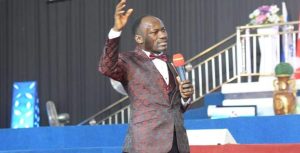 The popular clergyman released the prophecy on the micro-blogging site, Twitter, on Monday, March 1st, 2021.

In his prophecies, Apostle Suleman noted that anything “you ask the Lord this month, he will give you.”

He wrote: “May this month open you up to favour. May the month of march release yr inheritance (psalms 2.8)

“Anything you ask the Lord the month, he will give unto you (I kgs 3.5) May this week bring you progress, grace and abundance (John 10.10)

In other news, Senator Ali Ndume (APC-Borno South) has rejected calls for “blanket amnesty” to be given to bandits, stressing that it will encourage other criminal groups to take up arms.

Recall that renowned Islamic scholar, Sheikh Abubakar Ahmad Gumi, who had been visiting bandits in the various forest had called on the federal government to give amnesty to bandits just like it was given to Niger Delta militants.

But speaking when he featuring on a Channels Television Programme on Sunday, Senator Ndume warned that another form of criminality may emerge if “blanket amnesty” is offered to bandits.

The lawmaker stressed that such new armed groups would hope that the government will also negotiate with them.

“I don’t think blanket amnesty is the solution, because if you do that, another form of criminality may emerge, hoping that the government will bring them to the negotiation table,” Ndume said.