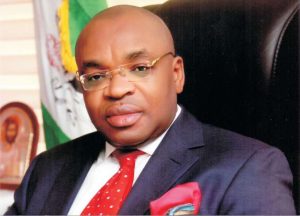 Four of the 10 count charges filed by the Economic and Financial Crimes Commission (EFCC) against Governor Udom Emmanuel of Akwa Ibom State over alleged N1.4 billion fraud has been dismissed by the Appeal Court.

Governor Emmanuel Udom was described in the charge as being “currently constitutionally immune from prosecution.”

Delivering judgement on Friday, Justice Bello Aliyu allowed the appeal filed by Udom against the ruling of the Federal High Court.

The judge nullified four of the 10 counts which particularly alluded to Governor Udom’s involvement in the alleged crime.

Recall that the Federal High Court, Lagos, had on May 30, 2019, dismissed an application filed by the Akwa Ibom governor seeking to quash the entire charge preferred against Usoro and other defendants by the EFCC.

The court held then that Udom’s application lacked merit because he was not a party to the suit.