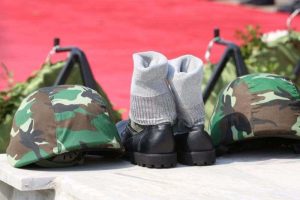 In commemoration of the 2021 Armed Forces Remembrance Day, President Muhammadu Buhari led other Nigerian leaders and members of the diplomatic corps to lay wreaths in honour of fallen soldiers.

The event which also had in attendance the Vice President, Professor Yemi Osinbajo, President of the Senate, Ahmed Lawan; Speaker of the House of Representatives, Femi Gbajabiamila; and the Chief Justice of Nigeria, Tanko Muhammad took place at the National Arcade, Eagle Square in Abuja.

The event also featured a minute silence in honour of fallen heroes; gun salute; release of doves to represent peace and signing of the anniversary register among others.

The Armed Forces Remembrance Day (AFRD), is a public holiday in Nigeria observed on 15 January to commemorate the servicemen of the Nigerian Armed Forces. It also honors veterans of the World War I and II as well as the Nigerian Civil War.

Meanwhile, the presidency has submitted that the security situation in Nigeria has improved since the administration of President Muhammadu Buhari assumed power in 2015.

This was contained in a statement by the special adviser on media and publicity to the president, Mr. Femi Adesina where he highlighted major achievements of the military under the current administration.

Adesina in the statement released on Thursday to mark this year’s Armed Forces Remembrance Day, said a lot has been achieved by the military “in tackling security challenges in the land, towards fulfilling the constitutional requirement of Government guaranteeing the protection of lives and property.”

The presidency, referencing a statement by the Borno State Governor, Prof. Babagana Zulum disclosed that Boko Haram is much weaker today than in 2015.

“January 15 every year is commemorated as Armed Forces Remembrance Day.”

“As the milestone is marked this year, it also provides ample opportunity to chronicle current landmark achievements by our military in tackling security challenges in the land, towards fulfilling the constitutional requirement of Government guaranteeing the protection of lives and property.”

“From state-wide statistics on affairs in the 27 Local Government Areas since 2011, the fact is that despite the recent happenings in Borno State, the security situation in Borno State and, indeed, that of the entire North East sub-region is still far better under Buhari, and this is based on records.”

“For instance, unlike the years before Buhari when a number of local governments were no-go-areas, we now have indigenes safely back to Gwoza, Askira-Uba, Dikwa, Ngala, Monguno, Kukawa, Damboa, Konduga, Mafa and led by our traditional leaders, which no one could have visited not to talk of living there. Our Emirs were all in exile.”

“Today, Bama is coming back to life and so is Askira-Uba, Damboa, Gwoza and others. Life is even returning to Baga. This was impossible before Buhari.”

“In fact, it was not possible to move few kilometres out of Maiduguri. Insurgents were so bold to attack and take over military facilities, like the Army Barracks at Monguno, Bama, Giwa Barrack and Multinational Joint Task Force Headquarters at Baga, to mention just a few. There were daily bomb blast attacks in many parts of Maiduguri, the most populated part of the state but all these have stopped under President Buhari. These are the records and no one can dispute them,” the statement reads in part.