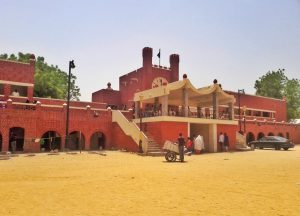 It has been reported that Bukar Mustapha Limanti, a Nigerian soldier currently serving at the Chabbal IDP camp, along Maiduguri-Gubio road ‘recklessly’ shot dead a young boy in Borno State.

According to reports, the unpleasant event happened around the palace of the Shehu of Borno in Shehuri North local government area (LGA) of Borno state yesterday, (Tuesday) September 1.

It was reported that Limanti who belongs to the troops of Operation Lafia Dole shot dead one Abdu Tijjani, 9, leaving two other children with gunshot injuries. Naija News, however, learnt that the two children who were affected by the gunshot has been taken to the International Committee of the Red Cross (ICRC) unit of the Borno state specialist hospital in Maiduguri for treatment, while the culprit took to his heels.

Reporting the event, an eyewitness told newsmen that “the recent incident of reckless shooting may not be unconnected to the murder of the innocent man.”

The witness revealed further that “Bukar Mustapha Limanti is the son of the driver of the current chief imam of Borno state and he is serving at Chabbal IDP camp, along Maiduguri-Gubio road.”

“He goes every morning to his duty post but comes back to town at night where he terrorises innocent people during the night with an AK-47. Two weeks ago, he shot a dog and a goat at Shehuri. This forced Digima Zubairu, the ward head of Shehuri north, to warn him, but he refused to listen and continued with the reckless shooting unabated.”

Residents recalled that an unidentified soldier had shot a deaf man selling kola nuts in the same area two months ago.

Meanwhile, a University of Calabar lecturer and two others have been kidnapped by some yet to be identified gunmen, Naija News reports.