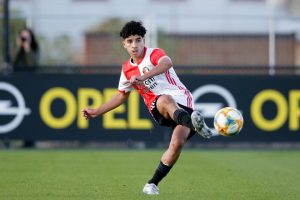 Salah, 17, who sees himself as a box to box midfielder, left Dutch side Feyenoord and would link up with the Gunners Under-23 side.

He joins fellow youngsters Tim Akinola, George Lewis, and Jonathan Dinzeyi who all recently signed for the North London club.

Arsenal – set to have a massive summer with ins and outs –  have so far completed the high-profile signing of former Chelsea star Willian and are reportedly closing in on Brazilian defender Gabriel Magalhaes.

In a statement on the official club website, Arsenal wrote: “Known as ‘Salah’, the 17-year-old has joined us from Eredivisie side Feyenoord as a free agent.

“He will join up with our Professional Development Phase ahead of the new season.

“The Dutch midfielder is renowned for his agility and creativity in the middle of the park. Predominantly a central midfielder, Salah has spent his youth career in the Netherlands, developing through the youth ranks in Rotterdam with Feyenoord.

“We all welcome Salah to Arsenal and look forward to watching his development with us.

“The deal is subject to the completion of regulatory processes.”

“It’s a good environment for me to work on my development and hopefully through the academy I can become a first-team player.

“They [Arsenal] first contacted my dad and then I went there for a week just to see what the club is all about, and after that they didn’t really have to say anything.

“I immediately knew that it was the right club for me.”