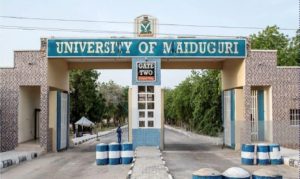 Lecturers of the University of Maiduguri (UNIMAID) has reportedly been gifted palliatives by the institution’s chapter of the Academic Staff Union of Universities (ASUU).

According to the report confirmed in a statement by the University’s ASUU Chairman, Dr Dani Mamman, bags of rice and money has been shared to lecturers of the institution.

Mamman noted that the palliative became necessary as the lecturers of the university were being owed five months’ salaries. Speaking to newsmen in a recent interview, Mamman, said funds from the ASUU cooperative society were used to cushion the effect of the non-payment of salaries on lecturers.

“We are lucky because we have the cooperative. So, what we do is that every member will be able to collect foodstuffs depending on your salary,” he said to The PUNCH correspondent.

He revealed further that “some could take two, three bags of rice or more. We also give monetary palliatives in terms of soft loans. Each of the lecturers collected not less than N110,000 so far.”

“The Federal Government still owes us four months arrears and that is excluding the July salary. We were only paid June; UNIMAID and Michael Okpara University of Agriculture, Umudike are suffering this.

“No more pressure from the national ASUU because they categorically said they have no direct business with anything that has to do with the Integrated Payroll and Personnel Information System. We are owed February, March, April, May.”

Meanwhile, Naija News had reported that the Academic Staff Union of Universities (ASUU) has described the new IPPIS payroll system introduced by the federal government as a foreign platform.

ASUU while expressing frustration over the IPPIS system, said: “at least the loan is not decorated and will never close the bank.”