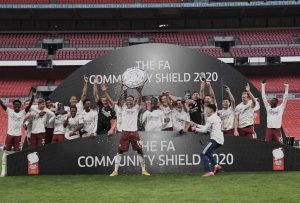 Arsenal on Saturday, recorded a morale-boosting victory against fellow Premier League team, Liverpool, by defeating them in the 2020 community shield game.

The game which was played at the Wembley stadium, finished 1-1 after extra time, forcing the game into penalties to decide the eventual winner.

Arsenal captain, Pierre Emerick-Aubameyang had opened the scoring with a fine goal in the 12th minute of the game but his goal was cancelled out in the 73rd minute by Takumi Minamino.

The game was forced into penalties after both sides could not be separated after extra time.

Arsenal scored all their goals from the penalty spot to win the game (5-4) on penalties as England youth international, Rhian Brewster missed his own penalty kick.

Reacting to Arsenal’s victory, former Vice President of Nigeria, Atiku Abubakar after the game, described the match as an exhilarating game.

Arsenal will be hoping their good fortunes continue both on and off the pitch as they get set to begin the 2020/21 Premier League season.