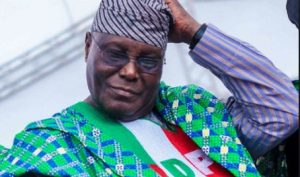 Former Vice President and 2019 presidential candidate of the Peoples Democratic Party (PDP), Alhaji Atiku Abubakar has released a statement that appears to be a swipe against the ruling All Progressives Congress (APC).

Atiku in a series of tweets on Thursday afternoon said only a party with law, order, discipline, and constitutionality can provide the true democracy Nigeria needs.

He then stated that his party, the PDP is a good example of order and constitutionality that Nigeria’s democracy needs.

“I pray that the order, discipline, and constitutionality, which we, as a party have exemplified, should guide institutions of our democracy, especially other political parties. Without law and order in a party, a party cannot provide law and order to Nigeria. -AA

“The @OfficialPDPNig has been an example of the order and constitutionality needed to sustain genuine democracy in Nigeria,” he wrote.

The @OfficialPDPNig has been an example of the order and constitutionality needed to sustain genuine democracy in Nigeria.

The former Vice President’s submission is coming at a time the All Progressives Congress is embroiled in a leadership crisis, following the Appeal Court order which upheld the suspension of Adams Oshiomhole as its National Chairman.

An interim caretaker committee headed by Yobe State Governor, Mai Mala Buni was also set up by the party.