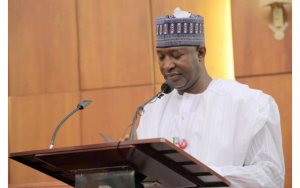 Ibrahim Idris, the Chief of Staff to the Minister of Aviation, Hadi Sirika, has passed away, Naija News reports.

In a post on its Twitter page, the Federal Ministry of Aviation announced that Idris died on Sunday night.

The Ministry wrote: “With total submission to the will of Allah, we announce the death of Dr. Ibrahim Idris Chief of Staff to the Minister Hadi Sirika last night.

“A hardworking, godly and simple (man). May Allah forgive him and grant him the highest rank in Jannah.”

He wrote: “Idris lived to define how best to relate with people and serve Allah without show. May Allah the Merciful grant you Firdaus and grant us same when we come.”

The deceased is expected to be buried later today in accordance with Islamic rites.

Meanwhile, a former Secretary to Taraba State Government (SSG), Alhaji Jika Jobbdi has died at the age of 68.
He died in Yola, the Adamawa State capital on Saturday, DailyTrust reports.

The late former SSG was also a retired permanent secretary.

He held several administrative positions under Taraba State government before his appointment as Secretary to Taraba State Government by former Governor Jolly Nyame in 1999 and served for five years.

He was survived by one wife and five children. He was buried in Yola according to Islamic rites.