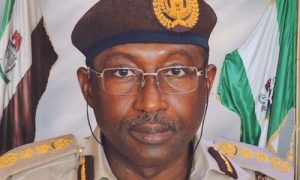 Muhammed Babandede, comptroller-general of the Nigeria Immigration Service (NIS), has revealed how the Federal Government permitted a company to seize the country’s assets at an arbitration court in the UK.

According to Babandede, the company targeted the building of the Nigerian National Petroleum Corporation (NNPC).

Continental Transfert Technique Limited, a member of the Contec Global group, the company, is a technical partner to immigration on combined expatriate resident permit and alien card (CERPAC).

Babandede made this known when he appeared before the joint senate committee on finance and national planning yesterday.

Babandede explained that the revenue generated by his organisation are sent to the treasury single account (TSA)  but that of CERPAC, of which CONTEC takes a larger share before the remainder is deposited into the coffers of the federal government.

The CG, who said “I don’t want to talk much”, claimed that company is taking a huge amount of the revenue for “doing nothing”.

In his opinion, the NIS is capable of doing the job CONTEC is doing at a much more subsidised rate, which would in turn provide more revenue for the government.

“The truth of the matter is that it was signed on our behalf and we have to implement it. This job (issuing resident permit), we can do it. It is not rocket science. This has been on for many years. This is a company that took Nigeria to court, to arbitration; it is a huge issue. I don’t want to discuss more because the ministry of justice and Mr President have taken it very seriously.

“If you see the amount the company is taking, you will be worried. There were several investigations by the senate, by the house; there are reports available if you want. I can get it for you or you can get it in the national assembly.

He said no-one should defend CONTEC as a company to do business in Nigeria, adding that the company that took the NIS to court, and also attempted to seize property, including their mission and NNPC building.

“Two thousand dollars for resident permit? We can make that resident permit with $500; $1,500 can go to the federal government. We throw away the company, and government will make more money.”

The comptroller-general did not reveal how the country has been able to manage the situation thus far and at what time CONTEC approached the arbitration court.