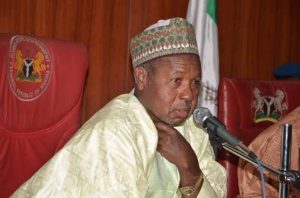 Katsina State Governor, Aminu Bello Masari, has said bandits started kidnapping after realising they can make thousands or millions of naira as ransoms.

He stated this while speaking at a two-day security awareness seminar for Jumma’at Mosque Imams and other Islamic religious leaders in the state.

The Katsina Governor noted that kidnapping, especially by bandits, has become a booming business in the country.

He asked clerics to play their own role and not to wait for security operatives whose number is inadequate to protect a state with over seven million people.

Masari said: “Nigeria being the richest among countries in the Sahel region has suddenly drawn the attention of those engaged in kidnapping business and selling of guns and so on, because here, they can kidnap somebody and get N10,000, N50,000, N100,000 and millions more.

“There is no doubt that this country is facing divergent security challenges, although the problem of Boko Haram has reduced but banditry and kidnapping is still with us.

“The bandits started with rustling of cows later killings, kidnapping, raping of women and girls, burning of villages and food stuffs belonging to residents of the state.

“We must go back to our tested traditional and religious method of enforcing security. The situation degenerated because of the failure of the religious leaders to play their assigned roles of enforcing discipline and good conduct amongst members.”