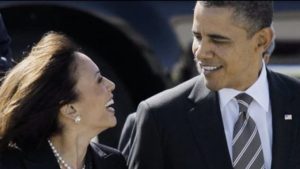 Former United States President Obama has lauded Sen. Kamala Harris (D-Calif.) after Joe Biden selected her to be his running mate for US 2020 election.

Naija News had reported earlier that Biden picked Harris as his running mate for the United States Presidential election slated for Tuesday, November 3.

Reacting to Biden’s decision to pick Harris, the former US President said the presumptive Democratic presidential nominee has an “ideal partner” to tackle the “real challenges America faces right now and in the years ahead.”

“Choosing a vice president is the first important decision a president makes,” Obama said in a statement. “Joe Biden nailed this decision.”

“By choosing Harris as America’s next vice president, he’s underscored his own judgment and character,” he added. “Reality shows us that these attributes are not optional in a president. They’re requirements of the job. And now Joe has an ideal partner to help him tackle the very real challenges America faces right now and in the years ahead.”

Earlier Tuesday, Biden, the flagbearer for the Democrats, announced that Harris would be his running mate, setting her up to be the first Black woman to be vice president if Biden defeats President Trump in the November election.

The Presidential candidate described Harris, a former rival in the Democratic presidential primary, as “smart, tough, and ready to lead” when he announced the decision to pick her as his running mate.

Biden also lauded her career in public office, including her time spent as the attorney general of California. Obama echoed those comments, saying that Harris is “more than prepared for the job” and that her story embodies a “fundamentally American perspective.”

“It’s a perspective we can all rally behind right now,” Obama said. “This is a good day for our country. Now let’s go win this thing.”

Meanwhile, Biden’s running mate, who served as the junior senator representing California since 2017, launched a campaign for president last year, and her signature moment came during a primary debate in which she confronted Biden on his civil rights record.

Harris, however, suspended her campaign before the primaries kicked off after polls showed her trailing several candidates.