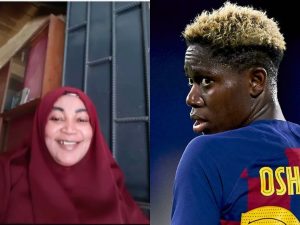 Nigerian professional footballer who plays as a forward for Spanish side Football Club, Barcelona Femeni, Asisat Lamina Oshoala has lost her stepmother.

Though the footballer did not reveal the cause of her stepmom’s death, Naija News suspects that the deceased had lived in harmony with the Asisat’s mother and the family before death knocked.

Meanwhile, Arsenal playmaker, Mesut Ozil, is set take a pay cut to sign for Fenerbahce, according to UK Mirror.
The Germain has reached an agreement with the Gunners to terminate his £350,000-a-week deal this January, Naija News reports.