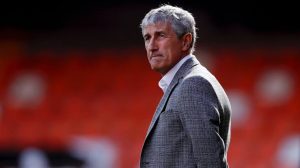 Barcelona were beaten to 8-2 by Bayern Munich at the Estadio da Luz.

Reports emerging on Monday morning claimed that the club president, Josep Bartomeu in a conversation with Spanish outlet Cadena COPE on Sunday night, August 16 following a meeting with the Barca board, including Eric Abidal noted that the coach is out of the club.

According to the report, Bartomeu is believed to have said: “He (Setien) is out,” when asked about the coach’s position with the club after the Bayern humiliation.

Naija News, however, understands that the club at the time of filing this report is yet to release an official statement as regards Setien exiting Camp Nou. The report states that an official announcement will be made today during a press conference.

Naija News recalls that the Spanish coach joined Barcelona in January 2020 as a replacement for Ernesto Valverde, the club’s former manager.