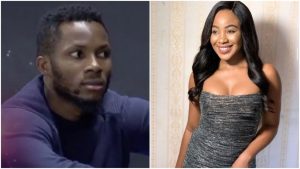 Erica, a female Housemate of the ongoing BBNaija Lockdown show, says she is convinced Brighto, a male housemate of the reality show, has feelings for her.

Naija News recalls that Erica had said she is physically attracted to Kiddwaya who she described as her “Bestie and Special friend” during Sunday live eviction but Kidd had made it clear that he has no feelings for her.

Days after this description, Kiddwaya assured that his relationship with Erica, whom he became intimate with two weeks ago, will definitely continue after the show. Kiddwaya, a 27-year-old housemate of the ongoing Big Brother Naija season 5, made this known during a conversation with Bright O on August 14.

Bright O, who is seen as Kiddwaya’s friend had asked if Kidd sees his relationship with Erica going beyond the House to which he responded in the affirmative. “Yes of course definitely will,” Kiddwaya stressed.

However, on Wednesday, the 26-year-old Erica who is from Abia state, southeast Nigeria, told Brighto who is seen by many viewers as a cunning man, that she knew he had feelings for her.

Erica said, “Brighto I had a dream about you. In the dream, you were telling me that you have feelings for me.

“I see the way you look at me. I see the way Brighto looks at me,” the Big Brother Naija Lockdown housemate, Ngozi Nlewedim, popularly known as Erica said.