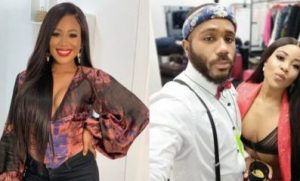 Prince, one of the housemates of the ongoing Big Brother Naija reality show has revealed that he would break the relationship between fellow housemates, Erica and Kiddwaya’s relationship.

Days after this description, Kiddwaya assured that his relationship with Erica, whom he became intimate with two weeks ago, will definitely continue after the show. Kiddwaya, a 27-year-old housemate of the ongoing Big Brother Naija season 5, made this known during a conversation with Bright O on August 14.

Bright O, who is seen as Kiddwaya’s friend had asked if Kidd sees his relationship with Erica going beyond the House to which he responded in the affirmative. “Yes of course definitely will,” Kiddwaya stressed.

However, this week during the diary session with Erica who acted as “Biggie” to Prince, asked Prince as Biggie which relationship he’ll break in the ongoing BBNaija Lockdown House and Prince replied: “It’s nothing personal, Kidd & Erica. I think it’s an infatuation on the part of Kidd and I think Erica will get hurt at the end of the day.”

After shaking Ozone table, he entered Kidd and Erica and shattered it.

Prince is the content I signed up for ooo