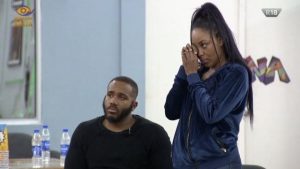 Kiddwaya, one of the housemates of the ongoing BBNaija Lockdown House, has broken silence on Erica’s disqualification from Big Brother Naija season five.

Naija News reports that Erica was disqualified on Sunday for gross misconduct after getting a third strike. Biggie told Erica that she could have said what she needed to say and walked away without worsening the situation. She was found guilty of denying the Deputy HoH access to the HoH Lounge, peeping through the windows and calling out to the camera crew, disrespecting her fellow Housemates, bullying, provocation and goading. Biggie continued that Erica’s actions last night demonstrated a flagrant disrespect of Big Brother’s House rules and was compounded by the fact that as the current HoH she was supposed to lead by example.

Given the backdrop of the strong and final warning issued last week and in accordance with article 18 of the Big Brother rule book and the three strike rule, this was the third and final strike. Erica was immediately disqualified from the Big Brother (BBNaija) House during the Sunday live eviction show.

Reacting to Erica’s disqualification on Sunday, Kiddwaya has disclosed his plans for his House sweetheart. The billionaire son said he would help the rising actress in any way he can when he is out of the show.

Speaking to fellow BBNaija housemate, Trickytee, Kidd said: “I dey miss this girl small sha….I miss her a lot. When I see her face it makes me happy and the way she used to come to sit on my laps.

“I know very well that for sure when I’m done here, I’ll help her any way I can.”