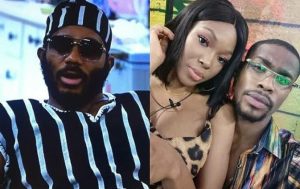 Kiddwaya, the current Deputy Head of House of the ongoing BBNaija Lockdown has predicted what would be the outcome of the relationship between Neo and Vee.

Naija News reports that Kiddwaya while discussing with another housemate, Bright O, said Neo will soon get bored of Vee’s British accent and this might lead to their breakup.

Giving a reason for his claim, Kidd said Neo is a confirm Nigerian street boy and sometimes British accent does not work in a relationship like that adding that they may last till December before they break up.

“Neo will get tired Of Vee, her British accent. Neo na Nigerian, local street guy.. when he becomes someone, he will have many options. They may last till December, but i don’t think they’re strong,” Kiddwaya reveals to Bright O as they ate shortly before their games.