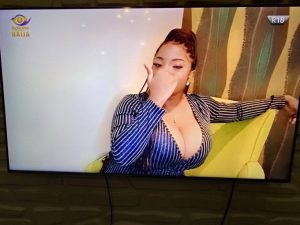 Busty BBNaija Housemate Dorathy Bachor has spoken up on the kind of male house mate she will be ready to  entangle with in the house.

Naija News had reported earlier that Dorothy was one of the 20 housemates of the Big Brother Naija season 5 reality show that set Twitter “ablaze” over her big breast.

However, Dorathry revealed that she has found her lover in the house already. She said this after the housemates met at the dinning to introduce themselves.

While she was serving her colleagues with her hot C.V, and the type of man she hopes to date, she revealed that her type of man was looking dirrectly at her.

“My Spec is looking directly at me”

Well, we will soon find out who “Mr.

Dorathy Bachor is a 24-year-old entrepreneur from Lagos, Nigeria’s commercial city. She believes she is the only one who should make you smile. Her sassiness will definitely prove to be an asset in Biggie’s house.