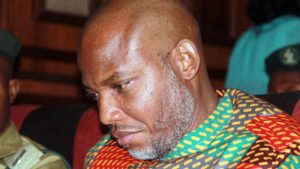 A face-off is brewing between the youth wing of Ohanaeze Ndigbo and Nnamdi Kanu, the leader of the outlawed Indigenous People of Biafra (IPOB).

Ohanaeze youths said the IPOB leader should be ready to face dire consequences if he failed to apologise to Nwodo, Ohanaeze youths and the entire Igbo nation for his unguarded utterances.

This news platform recalls that Kanu had in one of his outings on social media, a fortnight ago, directed Igbo youths to stone the Ohanaeze leader to death anywhere they saw him. Kanu’s statement, which went viral has dominated public discourse across towns and communities in Igbo land and beyond.

Displeased by the directive of the IPOB leader, Ohanaeze youths staged a solidarity march for Nwodo on some streets of Enugu metropolis Tuesday evening with march terminating at the Ohanaeze national secretariat, where they were received by the President of Ohanaeze, Enugu state chapter, Chief Alex Ogbonnia.

Wenceslaus Ogbonnia, the leader of Ohanaeze Ndigbo, Enugu State, who spoke on behalf of others said they embarked on the march to demonstrate that Kanu was on his own and to tell the world that Igbo youths were firmly in support of the various steps their parent body of all Igbo socio-cultural associations globally, had taken so far in ensuring unity of Igbo people world over.

The Ohanaeze youths said such steps had helped in cementing a peaceful relationship between the Igbo and their neighbours, host communities and other ethnic groups, most especially in Nigeria.

The youth wing of Ohanaeze Ndigbo described the utterances of the IPOB leader against Nwodo as very unbecoming and his recent outburst urging Igbo youths to stone him [Nwodo] to death, as the highest point of insult on the Igbo leader, the youths and the entire Igbo race.

“We read Mazi Nnamdi Kanu’s death threat in which he urged Igbo youths to stone Chief Nnia Nwodo, the Ohanaeze President General, wherever they see him on the social media.

“We followed it up and found out that it has been an issue of public discussion across Igbo land.  Here today, the Igbo youths are saying no to Nnamdi Kanu’s proclamation.

The Ohanaeze youths commended the leadership of Ohanaeze Ndigbo for adopting and canvassing for ‘restructuring’ as a panacea to the nation’s socio-political and economic problems. They said restructuring was similar to the ‘self-determination’ pursuit of an independent state of Biafra.

On his part, Nwodo thanked the youths for their solidarity, stressing that his commitment to the Igbo cause would in no way be vitiated. He added that Kanu and his cohorts remained his children, and called on the Igbo to close ranks and avoid bitterness and rancour.