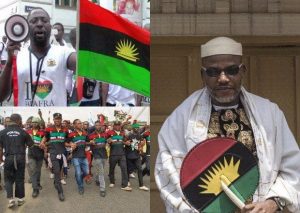 The leader of the outlawed Indigenous People of Biafra (IPOB), Nnamdi Kanu, has reacted the reconciliation of his group and Ohanaeze Ndigbo, an apex Igbo socio-cultural Organisation.

Naija News recalls that Kanu had in one of his outings on social media, a fortnight ago, directed Igbo youths to stone Nnia Nwodo, the President-General of Ohanaeze Ndigbo to death anywhere they saw him. Kanu’s statement, which went viral has dominated public discourse across towns and communities in Igbo land and beyond.

However, on Tuesday, the apex Igbo socio-cultural Organisation and Kanu led-IPOB agreed to work harmoniously towards the interest of the Ibo. The IPOB and Ohanaeze Ndigbo which had been at loggerheads especially in recent times brokered peace at the instance of First Republic Aviation Minister, Chief Mbazuluike Amechi.

Chief Amechi who addressed journalists after the peace meeting at the elder statesman’s house in Ukpor, Nnewi South Local Government Area of Anambra State, ]described as unnecessary any form of the altercation between Ohanaeze Ndigbo and IPOB.

Amechi, the only surviving member of the Zikist Movement, said both bodies were fighting for the welfare of Ndigbo even as he expressed joy over the withdrawal threat by Mr Kanu of stoning Nwodo as well as agreeing to work harmoniously with Ohaneze Ndigbo for the interest of the South East.

The elder statesman also revealed that part of the resolution from the meeting was the demand for de-proscription of IPOB which he described as illegal, urging the Governors and State Houses of Assembly in the region to commence action towards lifting the ban.

“I summoned the two bodies of Ohaneze Ndigbo and IPOB to express my displeasure with what I have been reading in the newspapers about Kanu giving orders for the stoning of Chief Nwodo by IPOB.

“I’m happy that even before this my peace meeting, Kanu has retracted the statement. We, therefore, appeal to Nwodo to accept the retraction and get it off his mind as IPOB has agreed to work with them.

“The two bodies realizing that it is the same battle they are fighting, marginalization, killings and denial of Federal Government to develop South East and Igbo land, in general, have agreed to work together for the welfare of Ndigbo.”

On the other hand, Barrister Aloy Ejimakor, a counsel to Kanu, who represented IPOB, said he was at the meeting with the blessings and instructions of his clients, just as he thanked Amaechi who he said was not a stranger to what he was doing having been once declared a terrorist.

The lawyer of the IPOB leader confirmed the retraction of his client’s threats on the Ohaneze President-General, describing it as one spoken at the heat of the moment.

Reacting to the reconciliation in a tweet on the micro-blogging site, Twitter, Kanu said “IPOB has given Ohaneze another chance to redeem themselves.”

The IPOB leader tweeted: “Like I said during my broadcast yesterday, IPOB has given Ohaneze another chance to redeem themselves. We must continue. Our demand remains #BiafraReferendum and #BiafraExit.”

Like I said during my broadcast yesterday, IPOB has given Ohaneze another chance to redeem themselves.