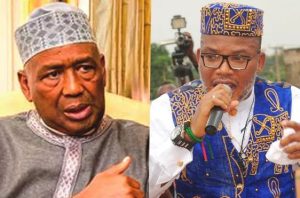 The leader of the outlawed Indigenous People of Biafra (IPOB), Nnamdi Kanu, has reacted to the death of Isa Funtua.

The Newspaper patron and influential media leader, who reportedly suffered a massive heart attack during the medical check-up, died at 78 years old.

After the news of the death of the President’s close ally, Kanu took to the social media platform, Facebook, to react to Isa Funtua’s death, describing the deceased as “another architect of Operation Python Dance.”

Kanu, in a terse statement released on his official Facebook Page, said the three people that will die after Isa Funtua are those that are against the emergence of Biafra Republic.

The pro-Biafra agitator wrote: “Another architect of Operation Python Dance is gone. Three down, two more to go.”

“All those that swore they would never live to see Biafra are all slowly leaving the stage. This proves that Biafra is imminent and 2020 is our year.”

Another architect of Operation Python Dance is gone. Three down, two more to go.

All those that swore they would never…

Meanwhile, the late Funtua who will be buried later today, Tuesday, July 21, 2020, in Abuja, Nigeria’s capital, was a life patron of the Newspaper Proprietors Association of Nigeria and hailed from Katsina like the president.

Late Isa Funtua served as a minister of water resources under ex-President Shehu Shagari, who presided over Nigeria between 1979 and 1983.