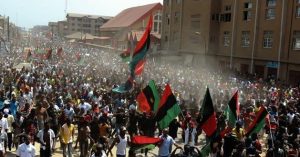 No fewer than 67 members of the proscribed Indigenous People of Biafra (IPOB) including IPOB native doctor have been arrested in Imo state, southeast Nigeria by the Nigeria Police Force (NPF).

Naija News reports that the Imo Commissioner of Police, Isaac Akinmoyede, who confirmed the development, said the suspects including four women were arrested in Orji, Owerri North Local Government Area (LGA) on August 9

The police chief in a police bulletin said the suspects were on their way to consult a native doctor, Cyprian Amadi, of Abashieke Egbema in Ohaji/Egbema LGA, adding that the suspects may have been planning an attack on security agencies.

CP Akinmoyede said: “It is believed that the group is planning an attack on security agencies to snatch weapons.”

According to him, the native doctor had removed bullets from one of the suspects who had gunshot injuries in the past.

He said: “It is also noteworthy that the group attacked and snatched two rifles from policemen during a violent protest in 2018, which were later recovered from a kidnap gang in a robbery operation.”

Operatives of the 34 Field Artillery Brigade intercepted the IPOB members at about 09.30 am at Mmahu Egbema checkpoint. The operatives, Akinmoyede said, called for reinforcement from the Divisional Police Headquarters, Egbema, who swiftly mobilised to the scene.

Akinmoyede said: “This organisation has been proscribed by the Federal Government of Nigeria.

“As such, any such gathering by the group is viewed as unlawful. They will be charged to court as soon as investigation is concluded.”