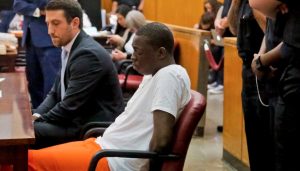 After a little over 6 years in confinement, Bobby Shmurda was released on Tuesday morning and briefly appeared on a few videos filmed by friends of his and posted on social media.

Bobby Shmurda is a free man again! As his family had announced in recent weeks, the New York rapper was released on Tuesday morning after serving a sentence of just over 6 years in prison. The penitentiary centre in which he was imprisoned thus formalized the news by updating his inmate file, which clearly announces that he has been released.

Two videos showing him in a phone conversation with a friend or onboard a private jet, surrounded by several friends – including Rowdy Rebel and Quavo – were also posted on social networks.

The opportunity to see him display a big smile, probably very relieved to turn this dark page of his life and to be able to once again have good prospects for the future. He will therefore now be able to take advantage of his newfound freedom to enjoy his family and friends.