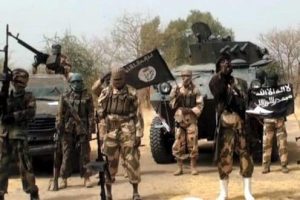 Suspected members of Boko Haram on Saturday attacked parts of Damboa town in Borno State, a military source has revealed.

A source told SaharaReporters that the Boko Haram insurgents besieged the down.

Boko Haram militants reportedly launched the attacks from the outskirts of the north-eastern city of Maiduguri into densely populated areas.

Meanwhile, an explosion from a suspected Boko Haram landmine has left at least two staff of the Transmission Company of Nigeria (TCN) critically injured in Borno State.

The incident occurred when their vehicle ran into the landmine at Mainok in Kaga Local Government Area of Borno State and caused a huge explosion.

Naija News gathered the workers were on site to carry out some repair works on damaged facilities and restore electricity to Maiduguri and other areas when the incident occurred.

According to information made available in a statement by PR Nigeria on the matter, the blast occurred when a team of engineers from the TCN and Yola Electricity Distribution Company (YEDC) were on their way to some sites for repair work.

The statement noted that the injured staff have been evacuated to Maiduguri Teaching Hospital (UMTH) for medical attention.