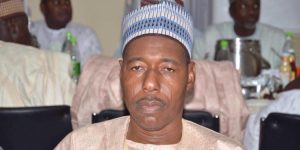 A former Deputy Director of the Department of State Service (DSS), Dennis Amakiri has revealed that the Borno State Governor, Babagana Zulum was warned but ignored the warnings before he was attacked by Boko Haram fighters in Borno State.

The former DSS boss explained that intelligence reports warned the Governor against making the trip but he decided against the warning and proceeded with the trip.

Naija News recalls Zulum’s convoy was attacked by Boko Haram fighters on September 25, 2020 resulting in the killing of several of his security team members including soldiers, policemen, and local vigilante members.

Before the most recent attack, the Governor’s convoy had also been involved in a Boko Haram attack in July. Luckily for him, he escaped unhurt on both occasions.

However, Amakiri, a former DSS Deputy Director while speaking on Thursday during a Channel’s TV programme said intelligence reports available to the security agents had warned the Governor against embarking on the trips but he chose to ignore them.

“The Governor of Borno State was given the intelligence that this road is not safe, he felt he could go,” he said.

“And being the Chief Executive, he ventured out. He was attacked twice. I hope he will not go again because at least they continue telling him, managing him to make sure that he keeps himself safe.”

Amakiri explained that very important security procedures are carried out before Very Important Persons (VIPs) move, but such personalities may sometimes decide against security advise.

Meanwhile, Naija News reports that following the most recent attack on his convoy, Governor Zulum has promised to be more careful.

This, the governor said while speaking with members of the National Assembly from Borno state when he was paid a sympathy visit in respect of the recent ambushes on his convoy.

Zulum who thanked the lawmakers for the visit, while reiterating his commitment to delivering a peaceful Borno State in no distant time.

He added that the situation in the state is still “very dicey” especially in view of himself and those who accompanied him to the northern parts of Borno State.

Zulum said; “The situation, of course, is obnoxious and unlikely to remain unchanged except drastic actions is taken; otherwise the insurgency will take over Maiduguri.”

In another development, the Governor of Borno State, Prof. Babagana Zulum has appealed to the federal government to engage soldiers from Chad to complement the efforts of the Nigerian Army in overcoming the Boko Haram Terrorists.

The Governor made the call on Wednesday when he hosted the Chairman of the Nigeria Governors’ Forum (NGF) and Governor of Ekiti State, Dr. Kayode Fayemi, who visited him in Maiduguri, to demonstrate solidarity and commiserate with him on the recent attacks on his convoy.

Explaining the reason behind his call, Zulum noted that his statement is not to belittle the efforts of the Nigerian Military who have been doing great in combating the terrorists but to seek more collaboration in ensuring the defeat of the insurgents.